How much water do you need?

How much water do you need?

Have you ever wondered why 8 glasses of 8 ounces of water per day have been recommended? Well, the truth is that there’s not good evidence for this claim as a concept, as evidenced by a research review published in the Journal of the American Society of Nephrology. Researchers concluded: “There is no clear evidence of benefit from drinking increased amounts of water.” The notion of consuming 64oz of water per day dates back to 1945, where what is now the Institute of Medicine recommended drinking one milliliter of water per calorie of food consumed. Based on average consumption estimations at the time, this worked out to almost 64oz of water per day. The problem was that they didn’t account for the fact that food gives you loads of water and counts toward your water intake. Take a look: 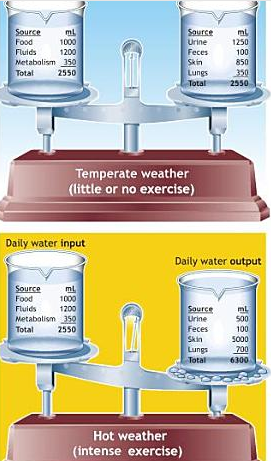 In the diagram above water intake from food accounts for nearly as much water as water from fluid intake. So if you’re getting adequate nutrition, you’re getting a lot of water. How do you make up the water differences in your daily life? You get thirsty and, despite what you’ve heard, thirst does not mean you’re already dehydrated. On the contrary, thirst begins when the concentration of blood (an accurate indicator of our state of hydration, because remember blood is filled with other things) has risen by less than two percent, whereas most experts would define dehydration as beginning when that concentration has risen by at least five percent.

This is why your dog isn’t dead in the backyard after trying to get that squirrel obsessively and why you, despite years of never paying attention to your hydration status before you started exercising, are reading this. Eat a diet filled with things that rot in short order (e.g. plants and animals), drink when you’re thirsty, and you’re covered.

Exercise is a different animal. Take a look at the diagram above and you’ll see significant increases in fluid output in the form of sweat. This is because sweating is our main mechanism of cooling, as evaporation of the sweat is wickedly efficient at keeping us from dying. This is important because the human organism handles drops is body temperature far better than it handles increases in body temperature. So not only are you sweating like a pig, but you’re breathing more heavily, which forces more water out of you as vapor, further cooling your body.

Under these circumstances, more water is necessary, but not as much as you think. In fact, too much water with all of that sweating leads to a condition called hyponatremia, which is where the blood is diluted and electrolyte concentration falls to the point where the normal osmotic balance at the brain is altered. As a result, the brain swells and you could end up with fun outcomes like death. Another name for this? “Water Intoxication.”

But this is if you’re sweating like a pig in an environment that is hot and humid…basically worst case scenario stuff. What if you’re training at Smart Strength? Our goal is to optimize the environment, so we keep the facility at 66* F or lower year-round in addition to using air circulators.

So if we account for water loss through vapor, since you’re really not sweating, then you’d exhale 90 to 120 mL of water during a half hour session that needs replacing. That’s 3 to 4 ounces, folks. Paltry stuff. If you doubled that 8 ounces, you’d likely account for most of the sweat lost during that time given controlled conditions. Drink to thirst the rest of the day; your body is smarter than you.